No Minnesota Values For John Kline

Would a fiscal conservative allow billions of 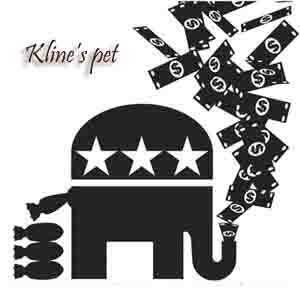 American tax money to go missing or be mismanaged? The answer is no but Congressman John Kline has. While Kline has been in office we've seen one scandal after another regarding the Iraq war. Mr. 'stay the course' Kline continues with his unwavering support of Bush's failed policies and questionable dealings while ignoring rampant abuse.

Add to this picture of wanton waste of American resources and money in Iraq is Rep. John Kline's refusal to support projects that would improve the lives of Minnesotans. Under Kline's watch we've seen billions spent on this war with little or no accountability and massive abuses.
Maybe it's time to look at someone more aligned with our Minnesota values. Someone who understands our elected congressman should work for us and not big corporations that underwrite his campaign.

“When it comes to Iraq, John Kline is handing over blank checks. When it comes to Minnesota’s needs, he’s nowhere to be found.” - Second Congressional Candidate Steve Sarvi.

That's not surprising. Kline's not even from Minnesota! He's a first-rate idiot.