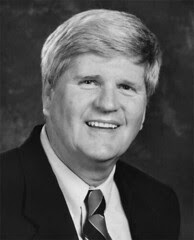 52 kindergarten students from Jefferson Elementary School, in Faribault, Minnesota wrote a letter to their legislators requesting that the Tilt-A-Whirl be made the State's official amusement ride.

The Tilt-A-Whirl was invented in Faribault by Herbert Sellner in 1926.

All you want to know about the Tilt-A-Whirl

State Representative Patti Fritz, who represents Faribault, introduce a bill that would do exactly what the 52 kindergarten students asked (Click here to read Rep. Fritz's comments about this legislation. )

Senator Dick Day (pictured) has a companion bill in the senate, however he is waiting to see where the bill goes in the House before introducing it to committee. "I'm not going to spend a lot of time on it," Day said.

My guess is that Mr. Day is focused more on a different kind of ride...
Maybe a ride to the 2008 general election, where he could be facing incumbent Tim Walz (D) for the 1st Congressional District's seat.
A funny irony is that Faribault, MN is actually in the 2nd Congressional District - so the question begs to be asked:
Will Faribault be a city without a State Senator due to a lack of interest? (fairly or unfairly - you know residents of Faribault will be wondering)

If you look at Rove's slides from the Doan hearings, Walz is no target for 2008. Seems Day and Demmer don't impress Rove Much. Can we get a song, with clip art anime?