Note to Governor Pawlenty, next time...stay home or better yet, bring the troops home. If you really cared then your two day secret junket to Iraq would have been better spend visiting with your mentor and chief Mr. Bu$h... explaining how the Iraq escalation strategy is pushing our overstressed troops even further. That the only thing the surge will do is hurt our troops more. 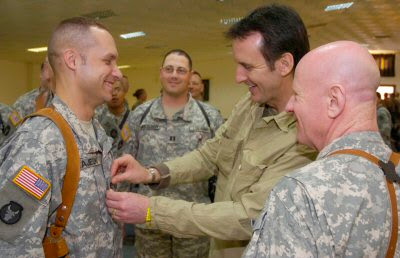 Pawlenty said he planned the tax payer funded trip to Iraq after about 2,600 Minnesota National Guard troops learned in January that they would be staying in Iraq for as much as six more months. They had been scheduled to come home this month. He said he wanted to thank them for serving under difficult circumstances...(naturally his trip shamefully made a good PR and a photo OP!)
Given that 72% of the troops in Iraq are having to do multiple tours (Beyond the Call of Duty), wouldn't it have been better to allow the troops to come home then Pawlenty to go there? Especially now that the top military generals are saying there is no military win to the Iraq war?
And the multiple deployments and extended tours of duty are taking a serious toll on our soldiers. Two-thirds of Army brigades are “not ready for wartime missions,” and one Pentagon survey found that troops in Iraq and Afghanistan suffer from chronic shortages of armored vehicles, heavy weapons, and communications equipment.
In addition, an Army survey conducted last year found “U.S. soldiers serving repeated Iraq deployments are 50 percent more likely than those with one tour to suffer from acute combat stress, raising their risk of post-traumatic stress disorder”
But instead of drawing attention to these very serious issues and risks, Pawlenty, smiles and jokes and then comes back to Minnesota...Tell me Mr. Governor, are you going to do that next year and the year after that and the year....well you get the picture...we all have for the last four years. Minnesota and it's troops deserve more than a nice guy clown as governor.

I recently returned from two weeks in Iraq as a photojournalist covering the Minnesota National Guard, and I can tell you first hand that Governor Pawlenty is probably the single most popular public figure with Minnesota soldiers in Iraq, because of his strong and unwavering support of the Guard.

Trips like this mean a lot to the troops regardless of whether or not you see any value in them.

Of the Minnesota Guard troops that I was with in Iraq, 86% percent of the soldiers eligible for re-enlistment while in Iraq have re-enlisted... Food for thought.

Note: I'm NOT a Republican, and I didn't vote for him, I'm just passing on my observations from Iraq.

He maybe likable...but that doesn't mean he's done the right thing and worked to end the war, or used his position to draw attention to the issues it's caused...it's all be photo ops..pretty pics aren't helping and it belies reality