Made fresh daily with Boehner 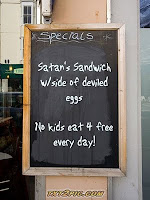 crap that was soaked overnight in political Beelzebub lard, then deep fried in the House and then again in the Senate with a sprinkling of Obama 'lite' salt and slapped on a staled but lusty onion roll with extra hot turd sauce and served with tea. Urban Dictionary defines it as: “The chiefest of hell’s dark delights, it is said that just one bite of it arouses an unspeakable lust of terrific potency.”...

Higher interest rates, no jobs created, fewer services... $2.5 trillion in total cuts and $2.4 trillion in debt limit extension with nothing, nada, zero, zitch addressing the real problems of the economy or jobs... Hell you can cut the budget from here to eternity, but that won't solve the problems and put Americans back to work!

Pass the deviled eggs of no viable options please while the rest of the American public bends over.
Posted by truthsurfer