Why The GOP Let Minnesota Shut Down

The Minnesota GOP controlled legislatures has shut down the state government by neglecting to pass a budget. They were intent on making this happen. There was no plan to compromise...but instead to enact an unacceptable social agenda filled with fringe ideology over sound budget planning and compromise.

While many marched in fourth of July parades, still enjoying their salaries, perdiem-mileage- lodging reimbursements... many more Minnesota state workers are

wondering how now to meet their basic necessities. For the poor, disabled and elderly Minnesotans, the GOP shut down will leave them without resources to deal with daily needs. This is because the GOP rank and file go to a state shutdowns as a way of bullying their ideology on issues like stem cell, abortion, and voter id.

So let's take a look at a couple of the budget sticking points:


"That is not Minnesota. That is not why the people of Minnesota elected me their Governor: so that millionaires could continue to avoid paying their fair share of taxes for the benefit of everyone else in our state"


Mark Dayton ran on, and it seems like perhaps the highest 2% could more readily afford to pay their fair amount of taxes similar to the rest of us Minnesotans. Seems simple enough... but the GOP says they ran on 'no new taxing' which means leaving the richest among us to their lower tax bracket...And for this loyalty to the wealthiest 2% of Minnesotans, the GOP decided to shut down the budget...but wait...there's more...which brings us to another example of a state shutdown sticking point in the budget...

According to a new report released from 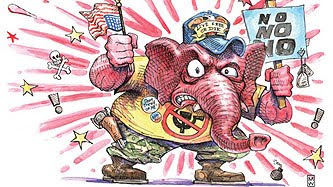 electionline.org, a project of the Pew Center on States, the cost estimate for Minnesota is close to $10 million dollars. And that doesn't include the dozens of costs for the state and local officials, from updating forms, websites, to hiring and training staff to carry out the new procedures in inspecting IDs. There will be costs for voter education in informing voters of the new law(s) and the increase in demand for services that provide IDs. These costs will easily run in the millions!

So how does implementing a voter id law square with the no new tax mantra of the GOP? Obviously it doesn't. So is voter fraud a top problem in Minnesota in need of immediate resolution among all the other pressing state issues that lawmakers are struggling to fund? Should voter fraud trump over education or safety or transportation or even a government shut down? The answer is hell NO....

In 2006 there were six alleged cases of illegal aliens seeking to vote out of a total of 2,202,937 votes cast. This represents 0.000003 percent of all votes cast. So in Minnesota this isn't even a blip on the problem radar so why is it a GOP sticking point in the budget?

Gimme a break, the GOP is breaking their no new tax pledge, shutting down the state government over...sigh...a social agenda and partisan ideology that resolves a non-existent issue. Wow! Some kind of adult leadership there...

In case someone is now wondering what they missed with this burning non-issue, numerous surveys show blacks, Hispanics, the elderly and the young are less likely to possess a driver’s license, passport or other form of government-issued identification. Other than the elderly, they are also largely Democratic constituencies. So the rational behind wanting to spend millions of tax payers money enacting voter id laws is to hopefully disenfranchise voters....yeah certainly worthy of a government shut down,

This is not a game to further extreme ideology! People's livelihood, their children's well being rest on paychecks...This is leadership at it's worse...A state shutdown does not save money. In fact, it has already cost the state hundreds of thousands of dollars and caused extreme stress to thousands of employees.

The GOP need to face the same reality the rest of us do, and perhaps losing the next election cycle will give them a better perspective on what real life compromise looks like when you're staring down an unemployment line.

Happy belated fourth of July...if anyone noticed I'm not blogging as much with summer and also I'm working on a few other time sucking projects...will try for once a week...

Kids and I went to see the grateful dead movie (pic)...this one goes out for all of us wondering if the long strange trip in the US is now coming to an end.