10 things you should know about John McCain (but probably don't): 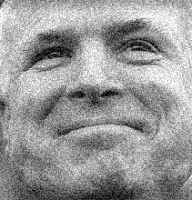 3. His reputation is built on his opposition to torture, but McCain voted against a bill to ban waterboarding, and then applauded President Bush for vetoing that ban.3
4. McCain opposes a woman's right to choose. He said, "I do not support Roe versus Wade. It should be overturned."4

5. The Children's Defense Fund rated McCain as the worst senator in Congress for children. He voted against the children's health care bill last year, then defended Bush's veto of the bill.5

6. He's one of the richest people in a Senate filled with millionaires. The Associated Press reports he and his wife own at least eight homes! Yet McCain says the solution to the housing crisis is for people facing foreclosure to get a "second job" and skip their vacations.6

7. Many of McCain's fellow Republican senators say he's too reckless to be commander in chief. One Republican senator said: "The thought of his being president sends a cold chill down my spine. He's erratic. He's hotheaded. He loses his temper and he worries me."7

8. McCain talks a lot about taking on special interests, but his campaign manager and top advisers are actually lobbyists. The government watchdog group Public Citizen says McCain has 59 lobbyists raising money for his campaign, more than any of the other presidential candidates.8

9. McCain has sought closer ties to the extreme religious right in recent years. The pastor McCain calls his "spiritual guide," Rod Parsley, believes America's founding mission is to destroy Islam, which he calls a "false religion." McCain sought the political support of right-wing preacher John Hagee, who believes Hurricane Katrina was God's punishment for gay rights and called the Catholic Church "the Antichrist" and a "false cult."9

10. He positions himself as pro-environment, but he scored a 0—yes, zero—from the League of Conservation Voters last year.10

8. "Black Claims McCain's Campaign Is Above Lobbyist Influence: 'I Don't Know What The Criticism Is,'" ThinkProgress, April 2, 2008
http://thinkprogress.org/2008/04/02/mccain-black-lobbyist/

Hey thanks for the great blog, I love this stuff. I don’t usually do much for Earth Day but with everyone going green these days, I thought I’d try to do my part.

I am trying to find easy, simple things I can do to help stop global warming (I don’t plan on buying a hybrid). Has anyone seen that EarthLab.com is promoting their Earth Day (month) challenge, with the goal to get 1 million people to take their carbon footprint test in April?... I took the test, it was easy and only took me about 2 minutes and I am planning on lowering my score with some of their tips.

I am looking for more easy fun stuff to do. If you know of any other sites worth my time let me know.

Ya know, I was really hatin' on John McCain until I read this blog. This actually makes me want to vote for him. The Children's Health Care Bill was a sham, so yay for veto, how great is it to stand up and hold people accountable for financial decisions on their homes (instead of bailing them out, like the government loves to do), good job on opposing abortion, and heck, we need someone more bullish on Iraq. We need someone to step in and say "Screw it, lets end this thing once and for all".

Of course, you'll be happy to know that McCain is wanting the US to enter into the disaster known as Kyotot, and his own legislation, McCain-Feingold, is hurting his own campaign efforts, but hey, who's perfect.

Go John! Say no to Socialism, Say no to Obama and Hillary!